A mixed week last week, with some good, some bad and some pretty awful, but nobody from the Differentials XI really shining to the point of double figures – man I miss Sane and Sterling already!

Cech and Mertesacker badly let me down in conceding to Swansea, but Gomez and Rudiger came up trumps with 13 between them. Goals for Zaha and Ramsey were by far my best midfield contributions – I badly misjudged Oxlade-Chamberlain’s likelihood of starting.

My suggestions of forwards last week were terrible, with Rashford going off for Martial, and the Frenchman promptly scoring United’s only goal. Ah well, we go again…. 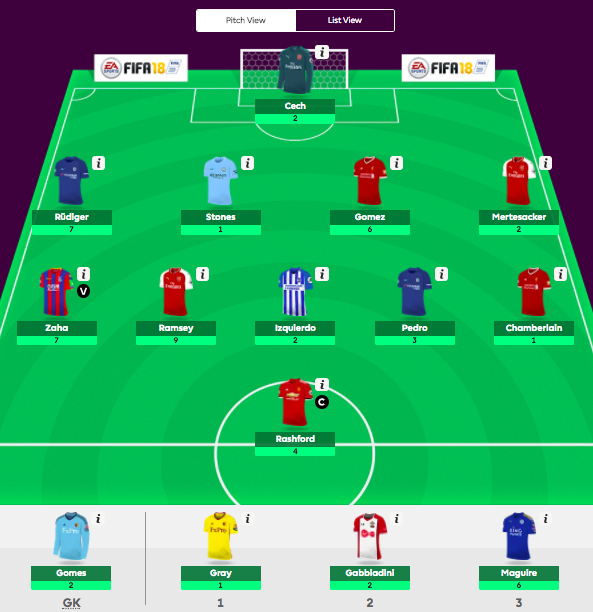 Changes galore as usual, with the following 15 players that I think could make a difference for you given their fixtures this weekend. 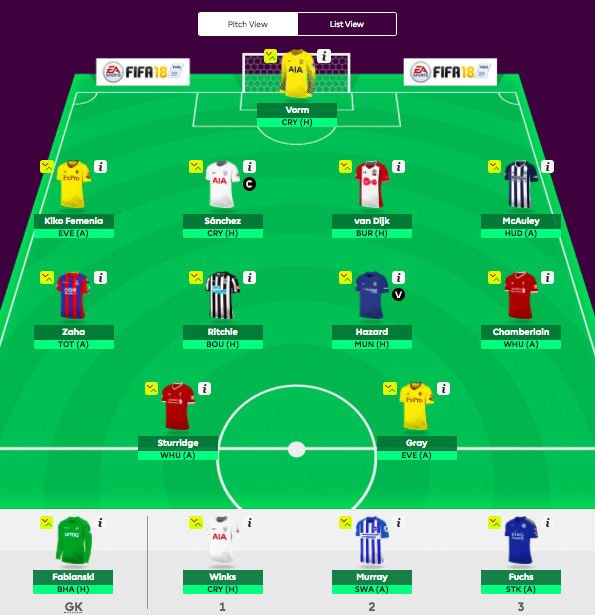 With Lloris out, Vorm (0.1%) for under £5m is a nailed on pick this week in my eyes. The likelihood is that the Frenchman returns after the international break, but if he does take a little longer, Spurs’ run of games is nice even after they play Crystal Palace this weekend. Remember, this is a Palace side who’ve still only scored in two league matches this year, and neither were away from Selhurst Park. On my bench is Fabianski (8.3%), a far more popular choice. Swansea host Brighton this weekend.

My favourite Spurs defender – Sanchez (0.4%) – is back, hopefully continuing to ride the crest of the wave that saw the team beat Real Madrid in midweek. With Alderweireld injured and Spurs looking a little less certain without Sanchez in the side last week, he’s sure to begin against Palace at Wembley. Also playing at home are Southampton, who host Burnley, so I’m picking Van Dijk (2.1%) as a player I’d hope to pick up a clean sheet. McAuley (0.7%) is back and with Dawson out, looks a cert to start against Huddersfield after managing an hour against Man City last Saturday. Fermenia (4.8%) is also in despite an away game at Goodison Park. I expect Watford to bounce back this Sunday though, and Everton are just every shade of awful right now. On my bench, I’ve picked Fuchs (2.6%), who put in his best points showing of the campaign last week in Claude Puel’s first game. Same again at Stoke? We’ll see.

From last week, Zaha (4.2%) and Oxlade-Chamberlain (1.6%) retain their places. The Palace man probably isn’t a surprise after his goal, though The Ox might be. Surely this is the week for him? Wijnaldum, Coutinho, Lallana, Mane all injured – if the ex-Arsenal man can’t start now in the league, he may not ever. The Reds are at West Ham this week, and while Palace go to Spurs, that is what makes Zaha a differential in every sense. Hazard (5.2%) returns as my premium option, and if he does to United what he did in last year’s Stamford Bridge fixture, I’ll be very happy. Finally, Ritchie (4.6%), at home to Bournemouth, lines up in the middle of the park. On my bench is a new face for this team: Winks (0.3%). At under £5m, a certain starter at home to the bottom club, I think Winks is due an attacking return. His play is very often positive, and he’s involved in a lot of good moves – this could well be the week he gets a first goal or assist.

Thanks to a combination of Deeney’s stupidity and Everton’s atrociousness, I’m sticking with Gray (1.3%) up top this week. He’s yet to really make an impact for the Hornets yet, but I think he’s got the talent against what is currently an unorganised and uninterested looking backline. He’s partnered by Sturridge (0.8%), who has two goals in two games over the past week. I think he’s done enough to earn another start for Klopp’s team, and a game at West Ham is favourable. Similarly, after goals in his last two, Murray (0.9%) should retain his place in the Brighton team, and he faces a trip to Swansea this weekend.