After the glory of last week, it was a little bit back to reality during the midweek matches. 45 is an extremely ‘shrug your shoulders’ sort of score, and here’s the breakdown.

The majority of my points came from the defence, who stepped up nicely with three clean sheets. Tomkins, Christensen and Mustafi all contributed a shutout, with the latter adding a bonus point for good measure. Gibbs, despite conceding, chipped in with five thanks to a lovely assist for Robson-Kanu.

From the rest of the team, squad even, just a Sanchez goal was all that could be mustered. That Arsenal scored five and that’s all he got is a tad disappointing, but when everyone around him offered nothing at all, I have to take it. Hazard, who was benched, was a nightmare choice, particularly with the armband. 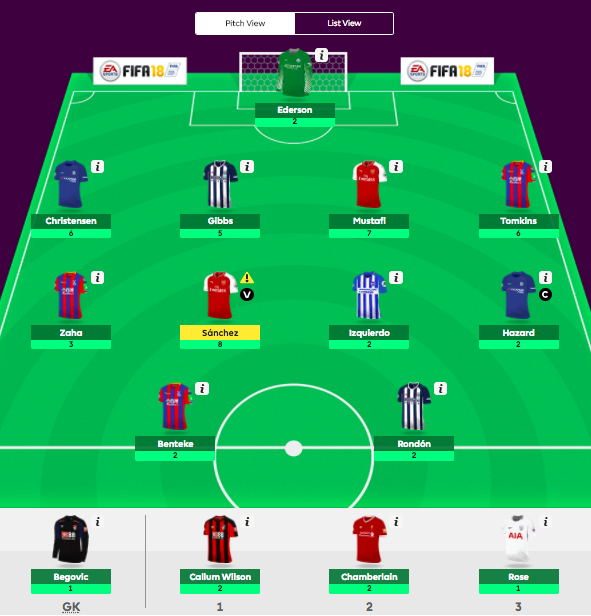 As I said last week, rotation was largely taken into account, but the choice of Hazard messed me up. I pretty much got the rest of my choices right, they just didn’t produce, particularly in an attacking sense. All change once more ahead of this weekend. 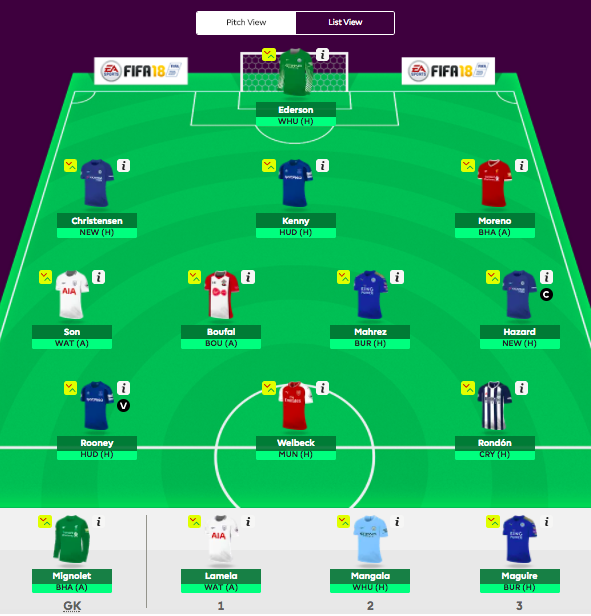 Last chance for Ederson (5.1%) this, who has faced Huddersfield and Southampton and claimed me only four points. West Ham however, are so shockingly bad, that I had to keep him in for this one at the Etihad – the absolute last place David Moyes would probably like to have to take his team after Wednesday. On the bench is Mignolet (1.6%), who is cheaper. Brighton away offers a nice fixture, even if you think the keeper should be suspended in light of the midweek red card he got away with!

Since coming into the Chelsea team, Christensen (1.8%) has kept three clean sheets from four and looks to be a far calmer presence than David Luiz, who is now injured. He’s a slight risk on Saturday given that he played 90 again in midweek and Azpi was rested, but I think he’ll remain in Conte’s side for Newcastle at home. In my backline are two Merseyside based players with Kenny (0.4%) the budget option and Moreno (5.3%) there based on matchup. Kenny is coming off the back of his best fantasy performance of the season (11 points) and has Huddersfield at Goodison Park – the Terriers are rotten away from home. Surprising 90 minute man Moreno faces Brighton, which is a fixture I like for him. On the bench, Mangala (0.1%) and Maguire (7.6%) both feature. I put Mangala in the other week and it backfired but given he was last to start when City last kept a clean sheet and that I have little faith in Kompany being able to play three full games in a week, he gets the nod for the Hammers at home.

After the disappointment of captaining Hazard (9.3%) against Swansea and him being rested, I’m giving it another go as the Blues take on Newcastle at Stamford Bridge. Surely given time off Wednesday with the weekend in mind, I expect big things from the Belgian here. He owes me. Son (1.4%) is in on the basis Alli or Eriksen (or both) need a rest, while Lamela (0.1%) – finally back from his long layoff – takes a seat on the bench. He came on to bag an assist on Tuesday, though I don’t know if he’s quite ready to start really yet – I just liked his price/ownership percentage. Completing my lineup is Boufal (0.2%), another midweek non-starter and Mahrez (4.5%), a midweek goalscorer. Boufal came on and set up the Saints goal at City and although he’s frustrating as hell, he’s a capable player and I like him to start at Bournemouth, who are very inconsistent. Mahrez’s goal against Spurs was reminiscent of two years ago, so I’m putting him in despite Burnley at home being nowhere near the banker it was 12 months ago.

My pre-season shout was that Rooney (9.4%) wouldn’t get ten goals. “He’s old, slow and past-it” is what I was generally telling anyone who cared to listen. And, although he’s looked a couple of those things, even I cannot deny him a place in this time after his midweek hat-trick. Now admittedly, this looks a little like points-chasing BUT consider these two facts. A) Sam Allardyce is now gaffer, and given that he was practically in awe of “play wherever you want” Wayne, he’s keeping his place at the weekend – old or not – off the back of his three goals. B) Huddersfield are the visitors to Everton, and they’re bad away, as stated above. Joining Wayne is Welbeck (0.8%) who loves facing his old club and should do so, given Lacazette’s injury. And finally Rondon (0.9%) who’s back again after looking sharp against Newcastle despite not adding to his goal last weekend.