Well that gameweek was a damp squib. The Differentials XI nailed the keepers – Cech and Pope – with both keeping clean sheets, but my entire defence let me down, bar Joe Gomez, who remained as the last sub.

In midfield, Arnautovic went back to Stoke and played exactly how I imagined he would – with his back up. And Ozil’s wonder goal and subsequent three bonus made him my highest scoring player. The others however generated next to nothing, while Okazaki lost his starting spot despite his brace last midweek.

Calvert-Lewin was my only goalscorer up front, leading to a pretty poor week overall. 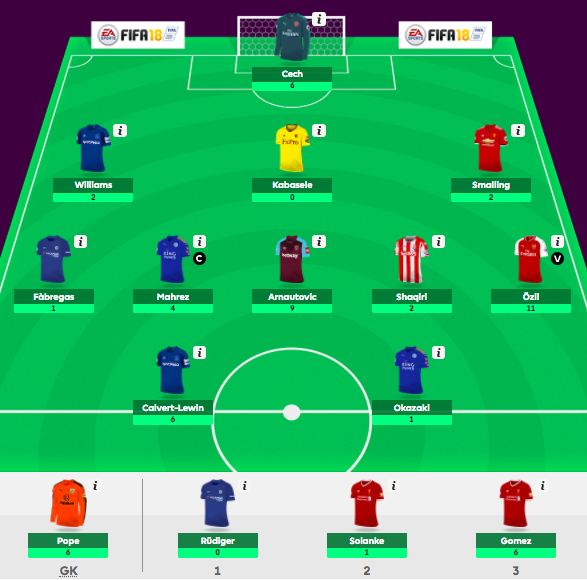 Weird game week is 19, with one game on Friday night and then nine more across four different kick off slots on Saturday in order to avoid Christmas Eve action. Then we get ready for the Boxing Day stuff on Tuesday. But before that, here’s a squad of players that might be worth looking at for the weekend if you have a spot or two to fill. 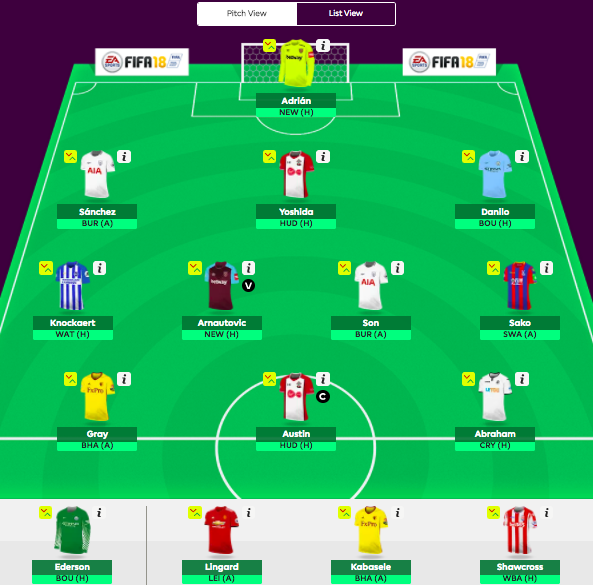 David Moyes quickly recognised the need to change things at West Ham, so he replaced Joe Hart with Adrian (1%) between the sticks. Since then, West Ham have kept three clean sheets in four games – the exception coming at the Etihad – and have generally looked much better than before. This week, they’re home to Newcastle. Because most City players have over 10% ownership, Ederson (5%) makes it as my backup option this week, with Pep’s juggernaut hosting Bournemouth on Saturday.

On the basis that Spurs have looked shaky defensively recently, Sanchez (0.3%) comes back into my team, as he’ll surely go straight into Poch’s lineup at Burnley. Interestingly, despite how good Sean Dyche’s men have been this term, only Swansea City have scored less goals at home. With Mangala a doubt for City, I have a theory that Danilo (1.8%) plays against Bournemouth. Options are limited, so I think Fernandinho will drop into the back four, with Delph possibly playing in midfield, meaning there will be a spot at left-back for the Brazilian. Also in my back three is Yoshia (3.2%), which largely ignores the fact that Huddersfield scored four in their last away match and that Southampton conceded the same in their last one at St Mary’s. We’ll see what happens, I guess. On the bench is Kabasele (2.6%) and Shawcross (0.9%), who both have kind fixtures, away to Brighton and at home to West Brom respectively.

In midfield, Arnautovic (0.9%) is back after his best performance of the season so far last time out. Coupled with the fact he was rested in midweek against Arsenal in the cup, I think he’ll remain up front when Newcastle – who are in dreadful nick lately – come to town. Another ‘listed as a midfielder but likely to play as a striker’ making the team is Sako (0.1%) who is both cheap and basically un-owned. With Benteke suspended and Sako scoring in each of his last two sub appearances, he could well get a run out from the start at Palace travel to Swansea. Son (3.8%) returns to the ranks for that trip to Turf Moor, while Knockaert (0.7%) is in because Brighton badly need some inspiration at the AMEX against Watford. On the bench, Lingard (3.3%) is back because he keeps starting and he’s now already beaten his best attacking returns for a full season and we’ve not even carved the turkey yet.

Up front, I’m going with Austin (4.8%) who has four goals in his last four starts as Huddersfield are the visitors to Southampton this week. Alongside him are two players that badly needs goals and I’m placing faith in both Gray (2%) and Abraham (8.8%) here. The former has only two strikes all season, while the latter has gone nine games without a goal. With Brighton and Crystal Palace their respective opponents this weekend, this is the time to get onto their fans’ nice lists.