51 points this week, riding my luck on a couple of occasions. Particularly with Danilo at the back, who didn’t start, but managed to come on and score his first City goal to earn me seven points. Clean sheet magnet Sanchez got the same, though opting for Adrian instead of Ederson was an error.

In midfield, Arnautovic continued his nice revival with another goal, while Charlie Austin was the right choice as captain after he scored again against Huddersfield. The only shame with him was that he picked up an injury. 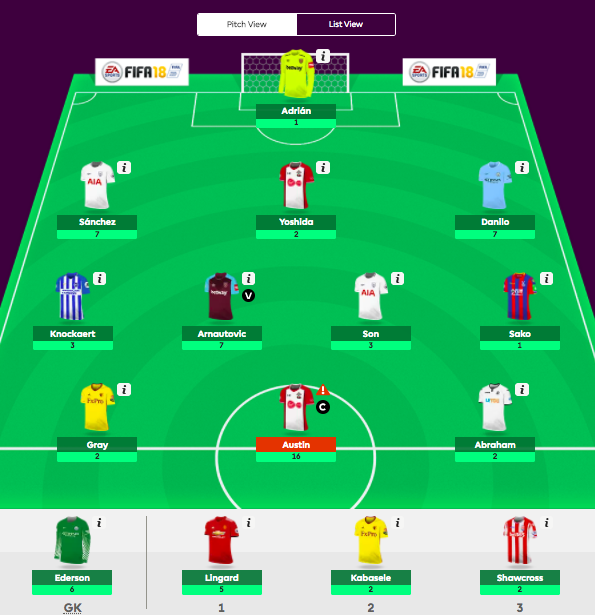 Pretty much all change ahead of the festivities, and hopefully there’s a name or two here that might be able to help you out this week. You may notice the scales are heavily weighted on those playing at home. Apologies that it’s brief, but I’ve got to go and play in an annual Santas v Elves charity football match!! 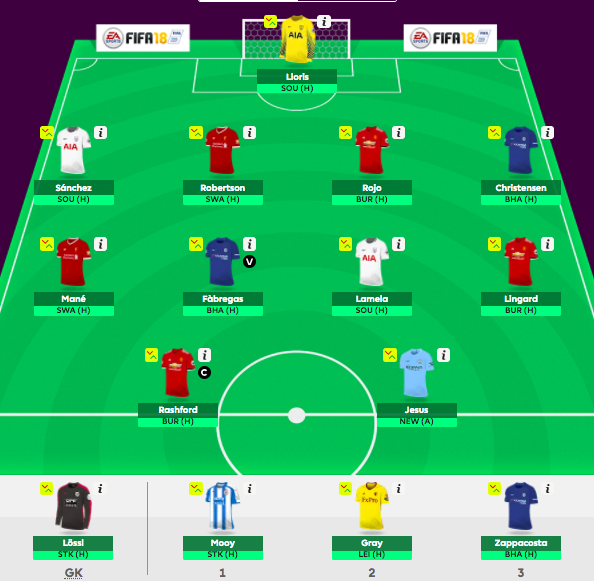 Don’t rate Stoke on the road, so gone with Lossl (8.7%) here. Lloris (8.5%) at home to Southampton is my choice if you want a more premium option.

Spurs look far better with Sanchez (0.4%) in the side, so he’s back in, featuring as part of a strong defence with Christensen (5.7%), Rojo and (0.1%) Robertson (1.3%) all in it. With Smalling injured, I expect Rojo to come back into the lineup, while Liverpool’s left back was a threat from crosses in that crazy game with Arsenal. On my bench, Zappacosta (0.3%), because I can’t decide if he or Moses will start, though I reckon he may well get the nod.

All change in midfield, with Mane (7.0%) the stand out name. In rotten form at present, I’m hoping Klopp sees Swansea at home as a chance to get him back on the scoresheet and restore his confidence. Fabregas (3.8%) and Lamela (0.1%) are gambles on the basis that I think their managers will rotate them into the team, while Lingard (4.4%) remains because he’s a menace – he really should’ve scored against Leicester. On the bench, Mooy (7.4%), Huddersfield’s biggest danger in the type of fixture I think that they’ll win.

Big names up top too, with Jesus (9.8%) and Rashford (8.5%) leading the line. Again, neither started on Saturday, so these are rotation risk/reward picks as I’m hopeful they’ll each get the nod this time around. On the bench, Gray (1.9%) is getting one last chance to prove himself before I really bomb him off for the rest of the season!

Have a great Christmas. Eat, drink, and get those green arrows!