Well, it was due. It’s been a fair while since a disaster week for the Differentials XI, but last week really took the biscuit.

20 points, no single return on the pitch bar a save point and almost as many points between my last two subs as the rest of the side put together.

This was, frankly, appalling and there’s very little else I can say, except sorry. Please, bask in the hopelessness of this… 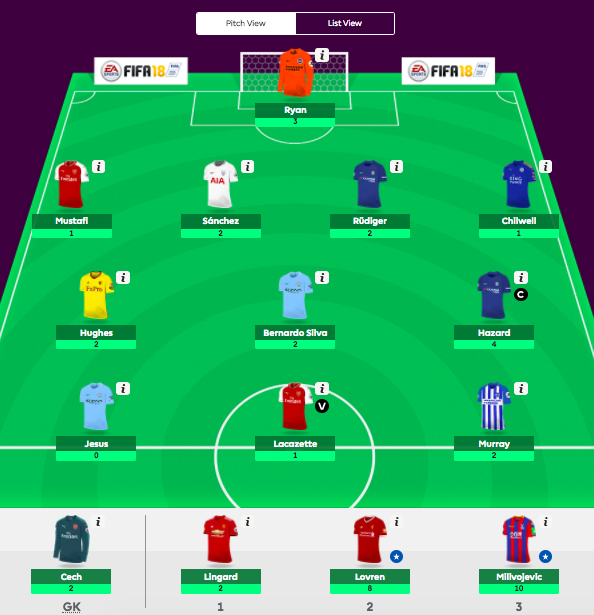 Plenty of sides on DGWs this week, which has informed much of my thinking as I picked the team. However, that’s not to say I’ve ignored one or two players with just one favourable fixture, but I am assuming most seasoned FPL players would’ve arranged their team to the point where they’ve likely got 14/15 on a double and are calling in the bench boost chip. 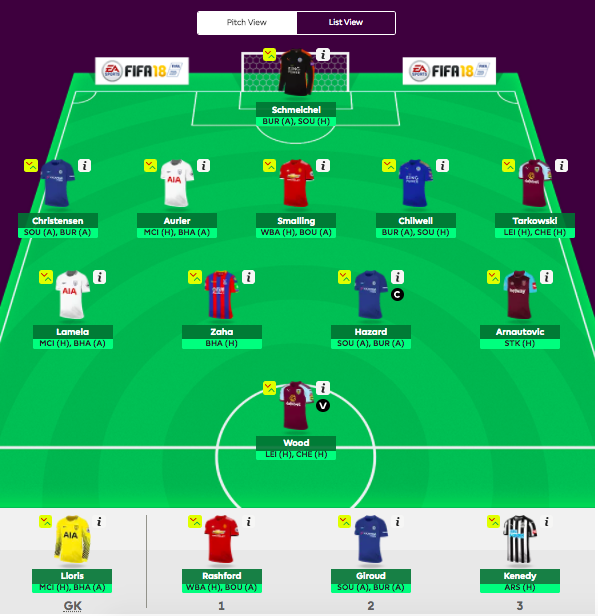 While I can’t see Brighton scoring against Spurs, City might – despite their recent run of losses – so although I’ve picked Lloris, he’s having to make do with a spot on the bench. Schmeichel is the man in the lineup, with a trip to Turf Moor before a home game with Southampton in midweek. I like these two games for Leicester, even though Burnley have been on a hot streak lately.

Despite last week’s travesty, Chilwell remains thanks to the decent Leicester fixtures detailed above. Also in is Aurier, who I fancy to start for Spurs given that Trippier is better and the FA Cup is more important to the club – their semi final follows next weekend. Smalling also gets the nod with nice looking games against West Brom and Bournemouth, while Christensen is in for Chelsea, who have two away games with Southampton and Burnley to contend with. In a somewhat contradictory move, Tarkowski completes my defence because of his pair of games, and basically I’m hoping for a whole load of 0-0s between all the sides on doubles.

Except I’m not, because I’m sticking with Hazard as captain this week. A lack of return against West Ham doesn’t mean he didn’t look the best player on the pitch, and it’d be surprising for that to not be the case over the coming seven days. Given Spurs’ cup exploits, I’m also going for Lamela, who could come in if some of the more heavyweight midfielders in Poch’s squad get a breather. The Argentine is undeniably overdue – he’s yet to score in the league this season!! Against Brighton, anyone? Making up the midfield are two London based midfielders with just one game this week, with Arnautovic home to Stoke and Zaha facing the Seagulls himself. Arnie loved the reverse fixture against his old club, though I think Mark Hughes had a lot to do with the fire in his belly that day. Zaha meanwhile, ‘gets’ the rivalry Palace have with Brighton, and given they’re position is still precarious, I can’t see him being anything but bang up for the clash at Selhurst Park. On the bench, Kenedy is named, with Arsenal and their awful away record visiting St James’ Park this weekend.

I’m going for a sole striker this week, as I’m unsure I trust many of the options. Wood is that man, and if he scores it’ll be bad news for my defence, but screw it – this is the Differentials team and things are done slightly differently around here, funnily enough. On the bench I’ve gone for Rashford and Giroud, two players I expect to see minutes with the FA Cup around the corner. Giround in particular should play a part – he’s hardly featured for Chelsea and when he has, he’s looked good. Give him a chance Conte! Chelsea have hardly been world beaters this year!

Good luck this getting those green arrows this DGW.