Not an elite week by any stretch, but 51 points from the Differentials XI last weekend wasn’t too bad.

At the back TAA’s cleanie with Stoke was matched by Vertonghen’s on Monday night, though it could’ve been even better with the Belgian hitting the post and having an assist ruled out when Kane strayed slightly offside.

In the middle, Zaha was the star as usual at Selhurst Park, while over at Swansea I was actually disappointed with six points doubled after Hazard’s early assist. FPL – it does make you greedy sometimes.

Up top I’d rather not talk about it, aside to say Ings scored one of the best goals I’ve ever ruled out for offside. Not sure why more wasn’t made of an outstanding finish? But either way, it gets me no more than two points. 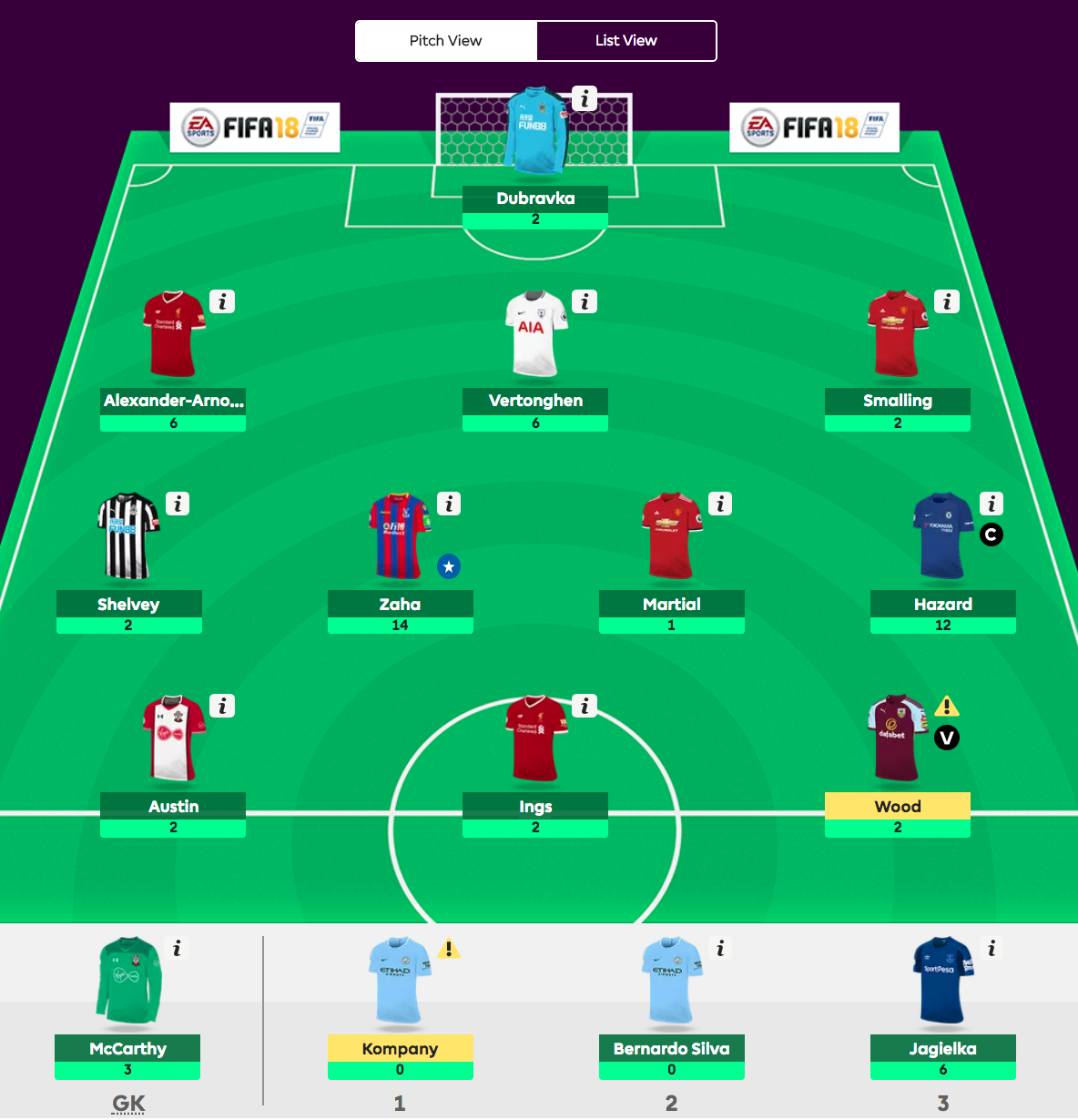 The upcoming week has a monstrous amount of games, with many playing twice. As ever, I can cheat a bit here and transfer out my whole team and ensure mine is full of players playing twice. The advice, as usual, is for players under 10% that I think could make a difference for you this week, if you can afford one or two. 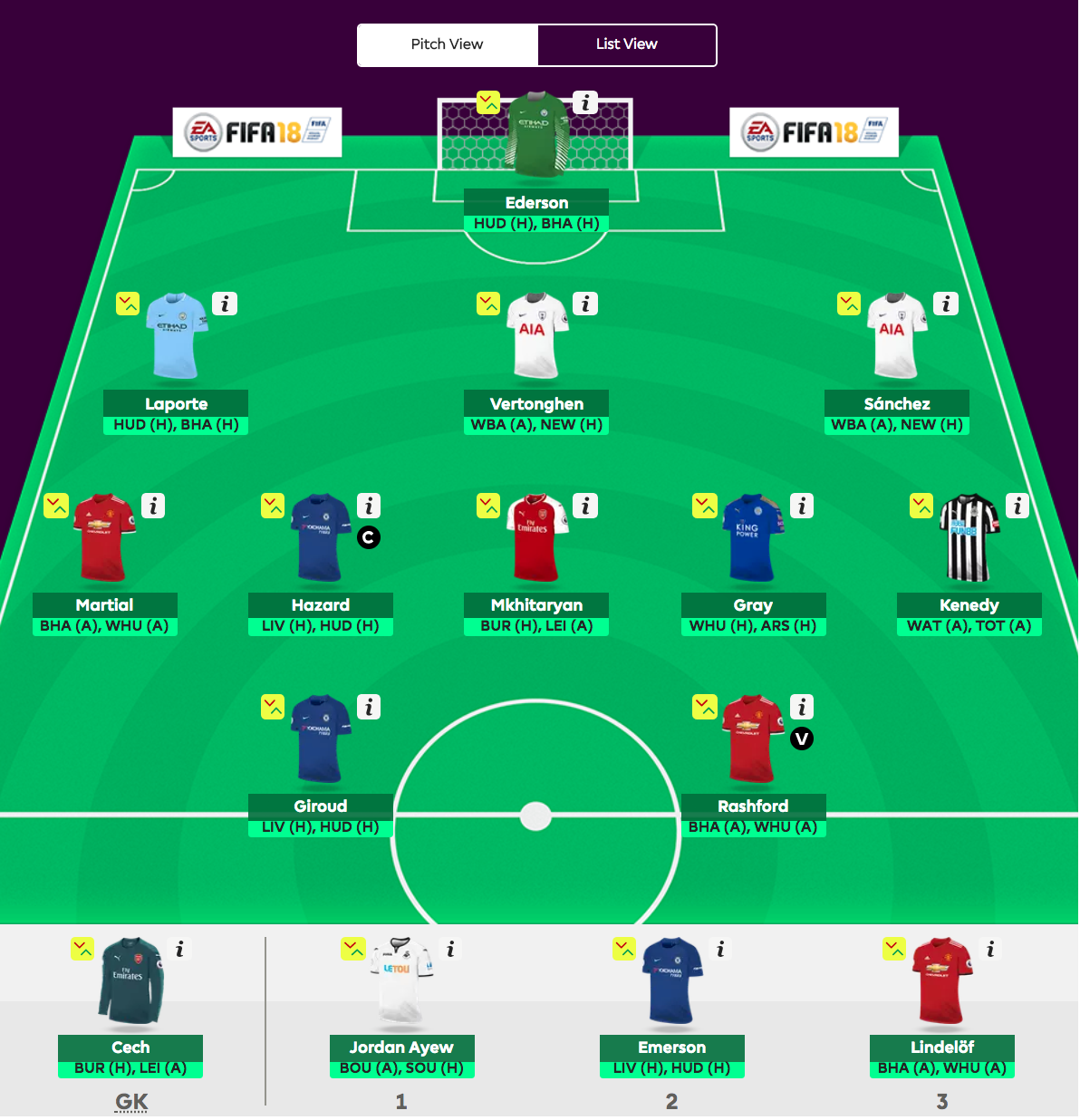 What I’ve done is basically go elite with the back four, plus the three on the bench. So in the lineup is Ederson, who has two home bankers against Huddersfield and Brighton. I’ll be disappointed not to get 12 points from him to be honest. On the bench I’ve plumped for Cech, whose games are slightly harder, plus the defensive in front of him is more than slightly worse. He’ll stay a sub here I’m sure.

Spurs have West Brom and Newcastle this week, so I’ve gone for a Vertonghen and Sanchez double in the hope of maximum cleanie exposure. Alongside them is Laporte, due to the injury uncertainty surrounding Kompany and Stones at City. I expect him to slot in and play both fixtures, hopefully doubling up with Ederson for big points. On the bench, I like Emerson this week, again with two home games. Liverpool have surely checked out with the Champions League final on the horizon, and Emerson has suddenly broken into the team and been given chances at Chelsea. Lastly, Lindelof, who is currently getting the nod over Bailly based on the fact his team are at the World Cup. I don’t like Jose and criticise him often, but that’s a really nice touch to help his players the best he can in the lead up to the summer.

Five across the midfield this week, with Hazard captain again and leading the way. Two home games and potentially, in my eyes at least, his final one at Stamford Bridge before a World Cup/summer exit to Real Madrid combination. Mkhitaryan is my Arsenal choice this week, as he’s looked sharp since his return from injury and the Gooners will want to check out from the Emirates in style given it’s Arsene Wenger’s last home game. With Lukaku injured and an FA Cup final on the horizon, I’m sure Jose will rotate his attacking options, so I’m going for Martial also. At Leicester, Albrighton’s ban should see Gray play both of their fixtures on home soil, and though his season has largely been disappointing, he’ll be looking to end it strongly given the chance he’s likely to get this week. Finally, I’ve swapped out Shelvey for Kenedy, because even though the Toon are away from home twice, he’ll be wanting to end his loan spell with the club on a high to put himself in the summer shop window.

Up front this week I’m going for Rashford, as I think he’ll benefit like Martial from some rotation around the Lukaku injury from last Sunday. Partnering him is Giroud, who has started Chelsea’s last couple in the battle with Morata to lead the line in the FA Cup final. On the bench, Jordan Ayew takes a place given that Swansea are still fighting for their lives.

Good luck this getting those green in what I’m sure is a crucial week in your mini-leagues!