It’s been months since we went this long without FPL action, and it feels like it too. When I came to write this column today, I had to really rack my brains about what happened last time out.

I had just three decent performers in the last round of matches, with Robertson the star defender as Liverpool registered a clean sheet down at Southampton. In midfield, Shaqiri was the top scoring player with ten points, while Mooy scored seven as Huddersfield thrashed Bournemouth.

The less said about the rest, the better, with a few ill-judgements at the back and up top. 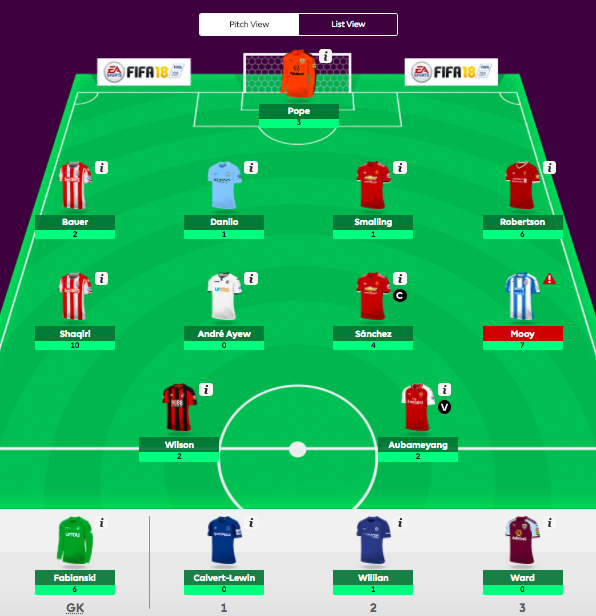 This weekend brings about wholesale changes as usual. Hopefully a couple of these might bring you more luck than those who represented the team last time. 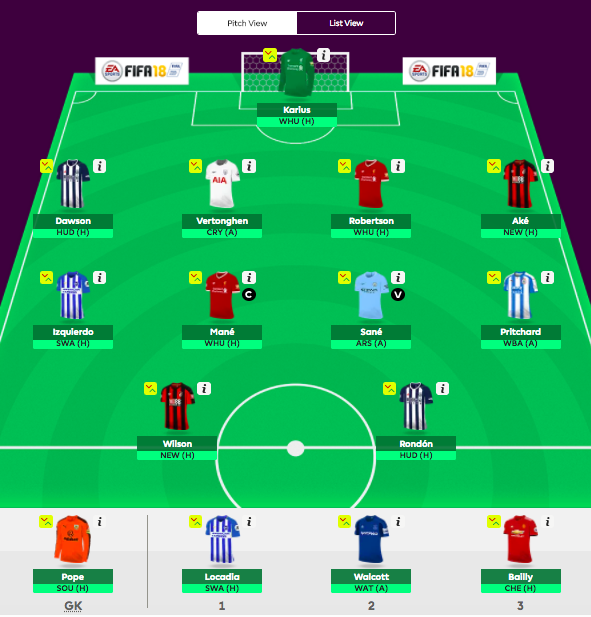 With 23 points in his last three appearances, Karius (0.7%) finally looks as if he’s nailed down the goalkeeping spot at Anfield – for now! With that in mind, he’s in for Saturday’s game with West Ham. On the bench I’ve gone for Pope (10.0%), who faces low scoring Southampton at Turf Moor. Burnley have been poor of late

Robertson (4.0%) retains his place having made that left back spot his own, and this week he’s joined by Vertonghen (9.2%), who is in a great run of form at present for Spurs. Ake (6.4%) also joins them in the backline, with Bournemouth looking to bounce back from the Huddersfield loss by beating Newcastle at home. Dawson (1.3%) this week is my fourth defender, as West Brom appear to be reaching a critical ‘now or never’ sort of time. On the bench, I’ve gone with Bailly (5.4%), who is seemingly back fit and will likely slot into the United backline – and surely Jose will play for a clean sheet right? He’s the master, in fairness.

Sanchez is out after a less than stellar start at Arsenal, so Champions League hat-trick scorer Mane (7.6%) takes his place as captain. West Ham at home is a nice fixture for him to bounce back in – the winger only has three goals in his last 14 in the league. Fit again Sane (6.3%) also comes into the lineup on the basis that he’s better than Ostersunds and they caused Arsenal no end of problems Thursday night. Alongside those two are two wildcard picks in Izquierdo (0.2%) and Pritchard (0.1%). The Brighton man has two goals in his last two league games, while Pritchard has got off to a flying start at the Terriers as he looks to revive his top flight career. On the bench I’ve gone back to Walcott (7.2%), who still looks Everton’s most dangerous player at present, and they play at Watford this weekend.

Up top, Wilson (9.9%) remains despite disappointing last time out, with his inclusion based largely on Newcastle’s poor away form. Rondon (0.7%) is his strike partner, and that’s mainly based on his FA Cup worldie last time out. With Sturridge injured, it makes sense to include him in what I’ve described above as a critical one for his club and Alan Pardew. On the bench, Locadia (0.0%) gets the nod, with the Brighton forward notching on his first start last week, albeit against lowly Coventry. He is their record signing after all, and I expect him to start getting league minutes over the coming weeks and months.