Another pretty solid week for the Differential XI last time out, with a few letting me down but mostly successes from the lineup that was chosen.

In goal, Dubravka came in after Cech was unexpectedly injured, though both the Slovak and Cech’s replacement Ospina kept clean sheets to earn six points. Also in the Arsenal defence was Mustafi, who contributed eight, alongside the same amount from Robertson, courtesy of an assist and six from Lindelof.

Midfield was pretty poor save for a Kenedy assist and six points. Stanislas’ early injury killed his chances of points while Ramsey and Albrighton blanked, but gained a clean sheet point each.

Of the three forward’s chosen, the two who started – Wood and Jesus – both scored to earn 17 points between them, but Rashford’s benching, given that he was wearing the armband for my team, was a rather large disappointment. 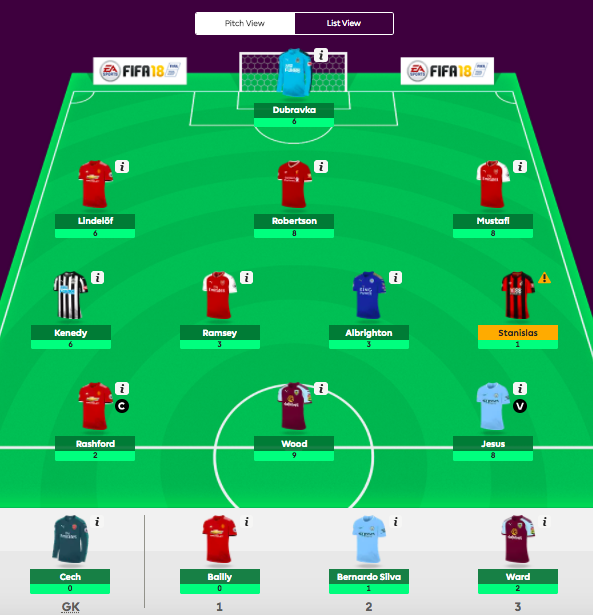 Another full week of fixtures this week, but be very cautious when making transfers before Saturday that the following game week has plenty of sides on ‘doubles’. Plan accordingly people. 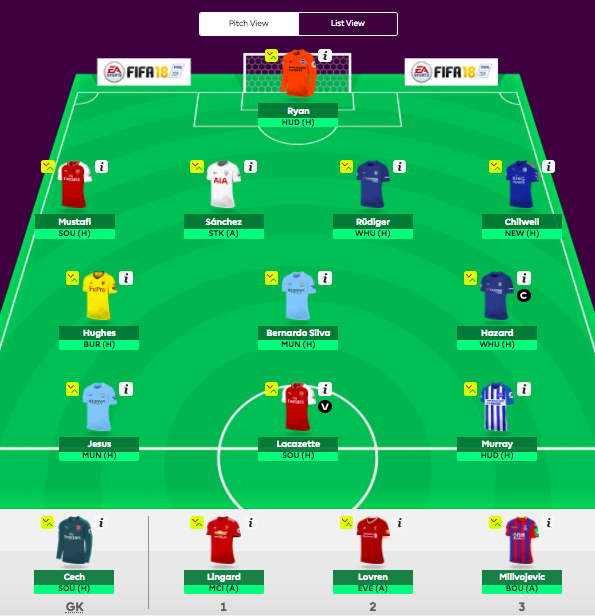 I’ve gone for Ryan (3.3%) in goal this week for a couple of reasons. Firstly and most importantly, in 11 league games in 2018 so far, Huddersfield have failed to score in eight of them – away from home, notching just two at bottom club West Brom. Also, Brighton need to win this game. At six points above the drop zone, nobody is really discussing them being relegated still this term, but this is arguably their easiest game left, and they’ll need to take maximum points to ensure they pull further away, while their opposition get dragged in. On the bench I’ve gone for Cech (4.5%) again, who missed last week’s Stoke clash but should be back for Sunday and Southampton.

I’ve also stuck with Mustafi (4.1%), who picked up a couple of nice bonus points last time out – even if I thought he was robbed of a near assist in the 3-0 victory over Stoke. Alongside him is London based pair Sanchez (1.2%) and Rudiger (3.2%). Sanchez is still largely unfancied in this game despite being a bit of a rock for Spurs, while Rudiger is still owned by 5% less players than David Luiz, despite playing over 1000 minutes more than the Brazilian to this point. Completing my defence is Chilwell (2.3%), who has been in good form in his last couple of games, scoring 16 points in his last two games through his tendency to attack down the left. I wanted to pick a Liverpool defender, so for the bench I’ve chosen Lovren (1.2%). Guessing the defence Klopp will choose for the Merseyside Derby is very tough given their midweek result, but I think Lovren needs the game time and expect to see him play.

Captain of my three man midfield is Hazard (6.8%). I feel like the Belgian’s time at Chelsea could be up this summer, and he’ll want to end the season with a flourish before a big summer rolls around with his national side. Next to him is Hughes (0.2%), who assisted one of the Watford goals last weekend in his first start back since his lengthy spell out injured. I’ve also stuck with Bernardo Silva (1.4%), who only came on as sub when I picked him last week, but think he’ll start the Manchester Derby this weekend with the Liverpool second leg to come. On the bench is two players away from home – Lingard (9.8%) and Milivojevic (8.4%) – who both posted attacking returns last weekend.

Up top I’ve stuck with Jesus (7.6%), who looked lost in midweek as City played into Liverpool’s hands, but he did get on the scoresheet last weekend. This week, with the title on the line against their most bitter rivals, I expect him to attempt to show Pep that Aguero won’t be missed. Partnering him will be Murray (7.0%), who has that vital Huddersfield game and will want redemption after a missed penalty last week. Also up top is Lacazette (6.0%), who I think we’ll see start with Aubameyang as Wenger looks to build on the confidence he gained with goals in his two (league and European) games since returning from injury.

Good luck this getting those green arrows this weekend.