So erm, the boys absolutely smashed it last time out! 70 points was a cracking showing, with 14 from Mane and 13 from Sane the highlights. I also had a goal from Locadia, and six each from Izquierdo and Pritchard in midfield. 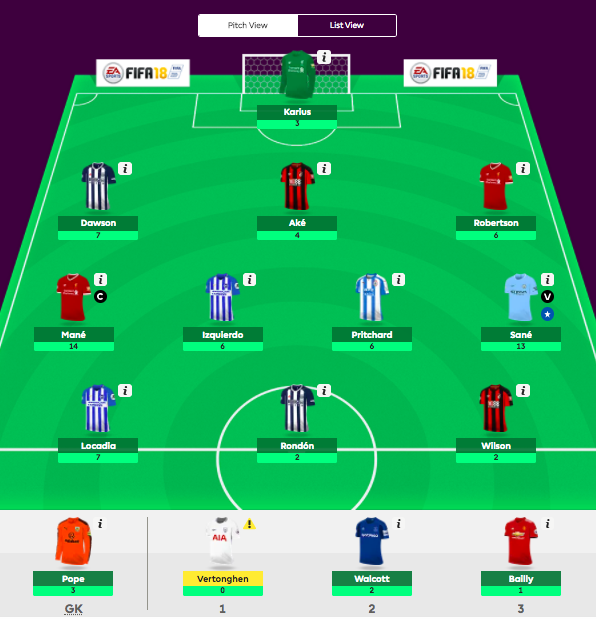 This weekend brings about wholesale changes as usual. Hopefully a couple of these might make the difference for you as we enter the last three months of the campaign. 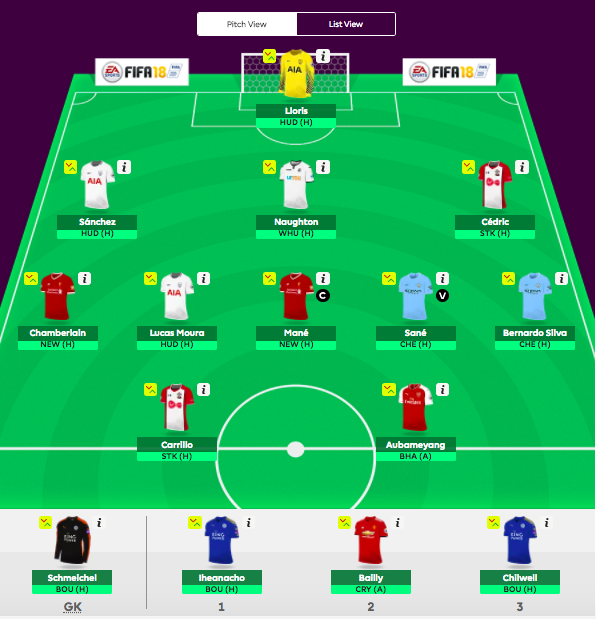 Lloris (8.4%) looks an absolute shoe-in to me this week, with a comfortable Spurs victory expected as Huddersfield visit Wembley for the first time since their playoff final win. On the bench, I’ve gone for Schmeichel (5.0%) at home to Bournemouth, with the smart money being on the Foxes winning after four games without a victory.

Given Lloris’ fixture, I’m happy to double up with Sanchez (1.0%) this Saturday. How he’s remained at just 1% all season is beyond me, and with Vertonghen a doubt and Alderweireld still perhaps not fully fit, the Colombian is a sure thing. The other two members of my back three this week are Cedric (2.4%) at home to Stoke and Naughton (5.2%), who hosts West Ham. Bailly (5.4%) and Chilwell (1.3%) make up the two defensive options on the bench, with the Leicester man my back-up double-up, if such a thing exists! The United defender is someone I chose last week, but he only appeared for nine minutes from the bench. This week, if he starts, he should be a good pick away at Crystal Palace.

The midfield looks a thing of beauty this week, with Mane (8.5%) and Sane (9.0%) remaining after their strong showings last time out. Both are at home again, and Chelsea can’t be considered an easy fixture for Man City, the football they’re playing right now is a joy to behold, and Antonio Conte’s men won’t be a side they fear. That’s why I’m doubling up on both sides, with Bernardo Silva (1.0%) joining the ranks alongside Oxlade-Chamberlain (2.9%). The final selection in midfield is Lucas Moura (0.1%), who I believe will start this weekend given that Spurs take on Juventus in midweek. After a couple of positive displays in the FA Cup, the ex-PSG wideman looks ready to make a full league debut, and Huddersfield at home seems exactly the right fixture to name him in the lineup for the first time.

My theory here is, if you plumped for Aubameyang (4.6%) when he joined Arsenal, you’ve likely still got him and is hoping he comes good. Look, Arsenal’s morale right now is rock bottom, they’re poor away and Brighton are good at home. But, BUT, the Gabonese forward already badly looks desperate for a goal, and I think Arsenal could click back into gear on the south coast after poor displays against sides above them over the last couple of weeks. Partnering him is another January signing – Carrillo (0.1%) – who registered an assist against Burnley last time out. On the bench is the risk pick of Iheanacho (0.6%), who I think is well overdue a start. And, considering Claude Puel’s side haven’t won in four, I reckon the Nigerian is worth a go up top against Eddie Howe’s Bournemouth.